Comes the Deluge: First-Crop Stallions at the Sales

Initial impressions of first-crop stallions at the upcoming yearling sales.

After a trio of yearling sales at which some of the first-crop stallions were represented by a limited number of offspring comes the deluge at Keeneland September sale and the inaugural Fasig-Tipton Turf Showcase sale.

Questions arise as to which of those should be most closely examined based on a variety of factors, including race record, stud fee, mare support, pedigree, and how their first yearlings sold at Fasig-Tipton’s July, Saratoga Select, and New York-bred sales.

To this, we are adding the biomechanical profile of these stallions when it comes to the probability of producing efficient runners. This year our outfit is also is taking into consideration how the nearly 100 colts and fillies by these stallions “measured up” on biomechanical racing programs at those sales. Of the 16 sires, seven had enough yearlings offered to date to give a hint as to how they might be turning out as racing prospects.

Among the remaining nine, four stallions—Can the Man, Cross Traffic , Flashback, Its­myluckyday—with promising biomechanical profiles as sires don’t yet have a large enough population of measured yearlings to give a reading considered reliable.

Of the seven, six are commercial sires located in Kentucky, and one is a sneaky good bet in New York. Several impressed with their ability to get some uniformity in appearance and biomechanics.

Peas in a Pod: Four stallions stood out for passing on a je-ne-sais-quoi physical impression. They range on the aptitude scale from left (power, brilliance) to right (stride, classic).

• The one that did it most consistently was Fed Biz , a son of Giant's Causeway who was a serious miler though he did win around two turns. His yearlings look like him, and when they stood up, they seemed uniformly to convey the power and strength one needs in a miler.

• Goldencents , twice a winner of the Breeders’ Cup Dirt Mile (G1), is yet another of the emerging sons of Into Mischief  who not only look like him but are passing along that distinctive look of versatility that comes from the line’s founder, Harlan’s Holiday.

• More Than Ready  has established himself as a sire of power (mostly Down Under) and more versatility (especially on turf), “Up Here.” They carry a modest swagger that announces their presence so when one looks at the catalog page, it prompts one to say, “Yep, that’s a More Than Ready.” His son Verrazano had that presence and clearly established himself as his sire’s best two-turn runner. His yearlings have solidified that impression, with plenty of power as well.

• Strong Mandate might seem to be an oxymoron of sorts because he had an abbreviated career that was topped by a smashing early win in the Hopeful Stakes (G1), not exactly what one would expect of a son of Tiznow. Yet, he has a nifty balance of power and stride, and his yearlings pull themselves together in a way that suggests they could be serious around two turns.

The Big Guys: Two stallions of considerable scope from the same sire line have passed on the best physical traits of the Fappiano/Unbridled type, which means they have a solid chance of being a versatile sort.

• Cairo Prince  became a “talking horse” of the sales because he had so many out there and they were clearly of the type that defines his sire line branch (Unbridled—Empire Maker—Pioneerof the Nile): sizeable (except for one, who was really something else), rangy, looking to go on.

• Will Take Charge  is one of a few sons of Unbridled’s Song who doesn’t look like him in mechanical profile. Instead, Will Take Charge is more mechanically similar to his broodmare sire, Dehere. The tall chestnut was an Eclipse Award winner around two turns whose offspring look uniformly capable of racing in a similar pattern. 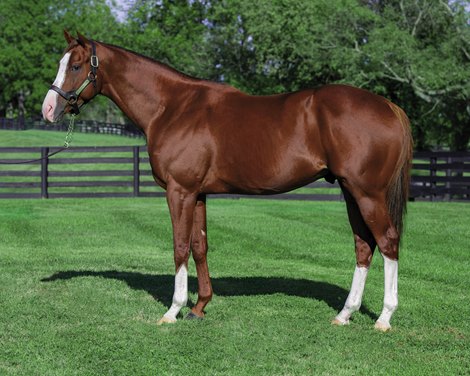 This Year’s “Hansen”—By the same sire, Tapit , looks like him and resembles him biomechanically—has a ton of yearlings out there, and they look like they will run fast: Honorable Dillon.